Kenneth on Games: Difficulty in “Getting Over It” 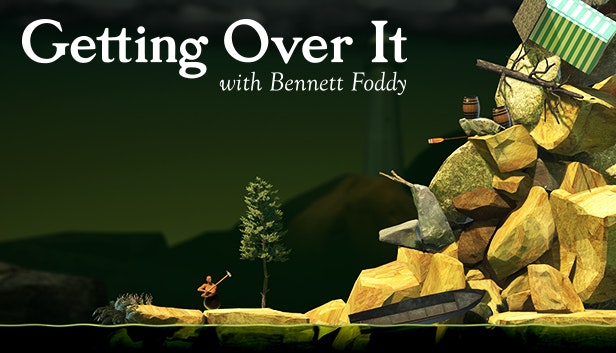 People say that Getting Over It is just a cruel game, and a lot of its difficulty comes from how there are no checkpoints and you are always able to lose all of your progress. But that isn’t entirely true. The mountain is built with “soft checkpoints” where it may not be any easier to keep going forward, but at least it is much harder to go backwards. These soft checkpoints are juxtaposed against difficulty spikes which may not necessarily be the most difficult parts of the game, but they make it very easy to go backwards. These two axes of difficulty intersect to stabilize the player’s experience despite a complete absence of character progression.

Hard to Move Forward, and Easy to Fall Backward

In most games, difficulty can be mapped out as a single variable changing over time, with peaks and valleys but generally trending upwards. Level 1 is rated 2/10 on the difficulty scale, level 2 is 4/10, level 9 is 8/10, maybe there’s a comic relief level that brings it back down to 1/10, and so on. RPGs have it easier because they can crunch numbers and objectively find how long it takes for the player to overcome any given obstacle, within a certain margin of error.

But games like “Getting Over It” cannot be mapped out so simply. There is no character progression: your hammer gets no longer, and your jump gets no stronger. Similar games like Dustforce and Cloudbuilt assign difficulty ratings to their levels, but how do they determine difficulty? How do you go about designing a level with a difficulty rating of 6/10? How do you make a level that is slightly harder than 5/10, and slightly easier than 7/10? Does the designer start with the intention of hitting a specific difficulty goal, or do they just throw a level together and use playtest surveys?

What even is difficulty in the first place? Is it the introduction of a new mechanic, or is it a culmination of previous dynamics the player has mastered? Is it adapting to uncertainty, or is it muscle memory and practice? All of these seem to be perfectly acceptable approaches to difficulty, and may even contradict each other.

When evaluating difficulty in Getting Over It, I wanted to focus on player perception and frustration. I went through and made a list of all the obstacles in sequential order, ignoring skips. Then, I rated each obstacle from a scale of 1-10 in two categories: how hard it is to move forward (HtMF), and how easy it is to fall backwards (EtFB). These two terms (HtMF and EtFB) represent two parts of the whole picture with difficulty. The term “difficulty” encompasses both of them and refers to the end user experience, the final result.

For example, the stairs just before furniture land are difficult, but just calling them “difficult” is not enough to do the topic justice. It is fairly hard to move forward, as you must make the jump from the chair to the security camera. But it is also not easy to fall down, because if you fall you will likely be able to catch yourself on the stairs. It would be rather rare to fall in such a way that you end up at the house below. In my model, this is mapped out as saying the HtMF is fairly above average, the punishment is quite severe, but the EtFB is also quite low.

On the other hand, an obstacle like the top of the devil’s chimney is designed in such a way that the player can launch themselves to the left, landing all the way back in the pit before the paddle. The top of the devil’s chimney actually has low HtMF, but it is also fairly likely for a player to launch themselves to the left, especially given the momentum they have gained from the ascent. The HtMF is slightly below average, the punishment is severe, and the EtFB is somewhat above average.

These measurements don’t account for player growth and learning. I tried to rate each obstacle in terms of the overall game, rather than the player’s skill level at the time they encounter it. For example, the tree at the beginning might be a solid 10 on the difficulty scale for a new player, but I lowered it in the context of every other obstacle on the mountain. I’m not sure how I could feasibly incorporate player growth into this model.

From a cursory glance, it looks like the three main spikes are the devil’s chimney, orange hell, and the bucket. For the most part, the HtMF and EtFB values are quite close to each other. There are a few points where they diverge, but those are rare.

However, this cannot account for all the different ways in which a failure can happen. For example, the concrete building after the devil’s chimney has a punishment rating of 0, because the vast majority of the time, nothing bad happens if you fall. But very rarely, and if you are unlucky enough, you can push yourself off the building with such force that you launch yourself past the devil’s chimney and land in the pit.

For a more applicable example, what is the punishment for falling down the ice cliff? Is it 1, because you have to pass the bucket again? In that case, the EtFB is quite high. Or is the punishment actually much larger, if we account for the fact that you can fall onto the snake? If you fall, it is rather likely that you will just land at the bucket, but you can rarely land on the snake instead. The EtFB value changes depending on how exactly we define punishment for each obstacle. I tried to choose the most intuitive punishment, but this is a subjective measurement.

These values get rather volatile: it does not mean that the rest of the game has low punishments, but rather that the bucket and the astroids have abnormally high punishments. This is because these are the points at which you can lose all of your progress and go to the very beginning. However, these charts may look more sense if we adjust the values for EtFB. If an obstacle has a high punishment but also a low EtFB, we adjust the punishment value to compensate. I decided arbitrarily to multiply the punishment value by EtFB/10.

One punishment in particular that is central to this point is the “do not fall” sign right after the grill and before the umbrella. If we judge purely by punishment for accumulated HtMF, it’s almost more punishing than orange hell. However, it is much easier to fall at orange hell than it is to fall at the “do not fall” sign. Thus, the overall punishment feels lower, not because it actually is lower, but because it has a lower chance of happening.

The final chart shows a much more logical map of difficulty. The three spikes are still there, but they get incrementally larger. Interestingly, almost every other obstacle looks insignificant in comparison to the big three spikes. This does not mean they were easy: instead, it means they had light punishments and low EtFB.

These charts show us several observations. Going back to HtMF and EtFB, HtMF values follow a fairly regular up/down curved pattern, whereas EtFB seems to fluctuate much more strongly. In math terms, if these were both described as waves, EtFB has a higher frequency, and the points at which EtFB meets HtMF generally mark the difficulty spikes.

Second, there seems to be some kind of “twin peaks” situation in the overall EtFB-adjusted-punishment graph. The devil’s chimney is preceded by the rock chokepoint, and orange hell is preceded by the stairs. There is a small peak, then a brief period of respite, then a much larger peak. However, the bucket doesn’t seem to follow this same pattern, and is instead a steady upwards curve.

There is an episode of “The Simpsons” where Homer is told to climb the “Murderhorn” mountain. He looks outside, sees an impossibly tall mountain, and gasps in horror. His fitness coach then reassures him that he’s not actually looking at the Murderhorn: the real mountain is to the right. Homer turns to look and sees an even taller mountain, dwarfing the one he was originally looking at.

The disparity between the mountains in the Murderhorn episode is oddly similar to the disparity between the adjusted punishment values for the rock chokepoint and the devil’s chimney. Maybe there is something inherently comedic about this type of setup: present the player with a tough challenge, give them a break as if rewarding them, then force them into a far tougher challenge.

One of the strangest aspects of Getting Over It is the strangely consistent time-to-first-climb, hovering around 8-10 hours. I personally finished at 9, but players seem to have agreed that 8-10 is the mark. It seems very odd that this game would be so consistent, considering that it relies purely on player skill. But all players start with the same level of skill, zero. The game’s difficulty curve accounts for every devastating fall and every lucky break. I think it’s a testament to how precisely an experience can be designed, even when taking frustration and despair into account.