Kenneth on Games: Lost and Abandoned in “War of the Chosen” 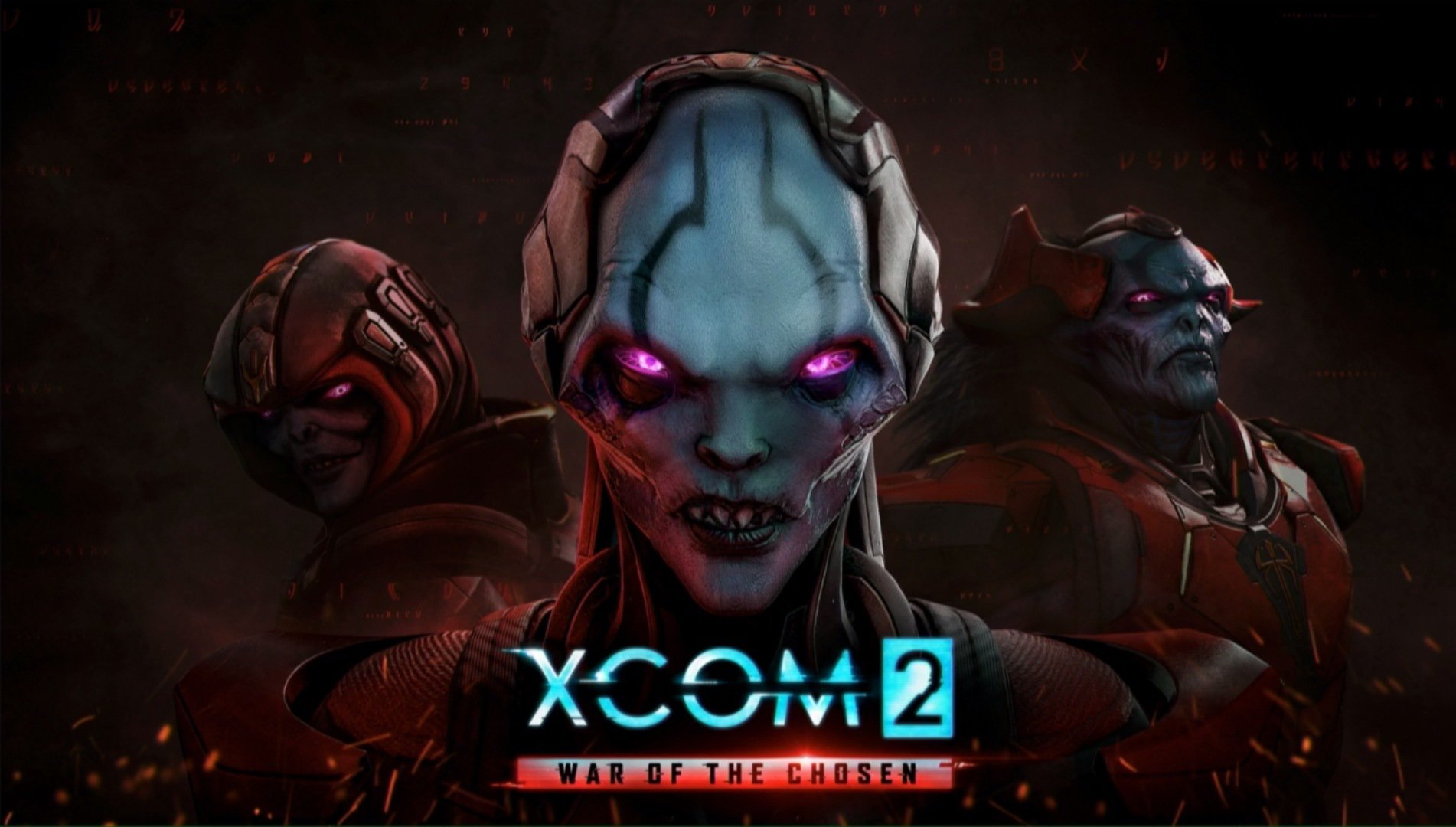 The War of the Chosen expansion for XCOM 2 introduces three factions that hate each other, and it’s up to the player to unite them to defeat the aliens. This social tension is represented in gameplay through the “Lost and Abandoned” mission, which introduces the player not only to the factions themselves, but also to the new threats that make the factions necessary. Although the factions are strong, they also have weaknesses, and the player learns firsthand why they need to work together.

Factions and the Three Part Mission

A faction is a class of soldiers who all have the same abilities. The first faction in “Lost and Abandoned” is the Reapers, who specialize in stealth and eliminating key targets. The second is the Skirmishers, former alien soldiers who use militaristic rigor to keep control of sticky situations. The third faction is not featured in the mission.

All of them have the same goal as the player, to defeat the aliens and retake Earth. However, since they hate each other, they refuse to cooperate. The “Lost and Abandoned” mission opens when the Reapers and the Skirmishers agree to a ceasefire and a meeting possibly leading to an alliance, as long as the player mediates the encounter.

This mission takes place over three parts. First, the player sends a pair of soldiers to rendezvous with a Reaper and escort her to the meeting point. Second, the player does the same with a different pair to fetch a Skirmisher. Finally, once the two separate teams meet, the player must ensure that nothing goes wrong.

When you meet the Reaper, your party is ambushed by zombies called the Lost. In typical zombie fashion, they are easy to kill but come in large numbers. However, this starkly contrasts with the Reaper’s primary strengths. Reapers are concealed and cannot be detected by enemies unless they open fire, which makes them great for scouting. But there is no need to scout the Lost because they are mindless zombies and thus predictable.

Additionally, the Reaper’s weapon deals low damage and has low ammo. But more importantly, firing the weapon has a chance to reveal the Reaper. In a wider gameplay context, Reapers are good at finding key targets, taking a single decisive killing blow, then escaping back to the shadows. They are very effective at this, but very ineffective against hordes of Lost.

Generally in game design, the rule of thumb is that when you give players a new tool, you also give them a safe space to experiment with that tool. In Death of the Outsider, in the first mission after you gain supernatural powers, you are locked behind a giant metal grate with no other people around, which lets you experiment with your new arsenal. Once you’re confident, you can teleport over the grate to enter the level, but until then there are no threats. If players are still learning how to use their tools, then naturally they should not be expected to use them in high-pressure situations with real consequences.

But “Lost and Abandoned” defies this rule by giving you a Reaper and then putting you in a situation in which you cannot properly use the Reaper. Instead, the mission is just balanced around your two original soldiers and the Reaper is better off doing nothing at all. In isolation, this might have seemed like bad design, but it leads up to a bigger storyline.

In the next section, you are escorting the Skirmisher. They can fire twice in a single turn, whereas other soldiers can only fire once. This makes Skirmishers naturally very strong against the Lost, but you don’t fight them. Instead, you encounter some hostile Purifiers, which are aliens who are sent to burn the Lost with flamethrowers.

Skirmishers have a grappling hook which they can use to pull themselves up to elevated terrain, and pull enemies out of cover into point-blank range. I had my Skirmisher grapple up on top of a shipping crate, pull a Purifier towards him, and then shoot him in the face. What happened was the Purifier’s gas tank exploded, damaging the Skirmisher, and destroying the shipping crate, causing the Skirmisher to fall and take even more damage. Lesson learned.

Just like how Reapers are not very effective against Lost, Skirmishers are also not very effective against Purifiers. They could just shoot like a normal soldier, but they would be less effective and would not take advantage of their unique strengths. This builds a narrative that the two of them need each other to cover their weaknesses, so that the Skirmisher can mow down hordes of Lost while the Reaper targets Purifiers with pinpoint accuracy. The player becomes invested in having these factions cooperate, because they are excited to see how powerful they can be when working together.

Encounter with the Chosen

In the third part of the mission, the Reaper and the Skirmisher finally meet. However, tensions are high and they are more willing to kill each other than to cooperate. Just as they are about to shoot, they are ambushed by a Chosen, an alien boss who is trying to crush the resistance. This presents a difficult challenge which is designed to push both the Skirmisher and the Reaper to their limits, and they agree to fight together.

There are three Chosen, but only a specific one, the Assassin, appears in this mission. Every playthrough, the Chosen come with different strengths and weaknesses. Although random generation enhances replayability, in this case having a specific set of strengths/weaknesses could act as a subtle nudge to teach the player how to combine the Reaper and Skirmisher optimally. 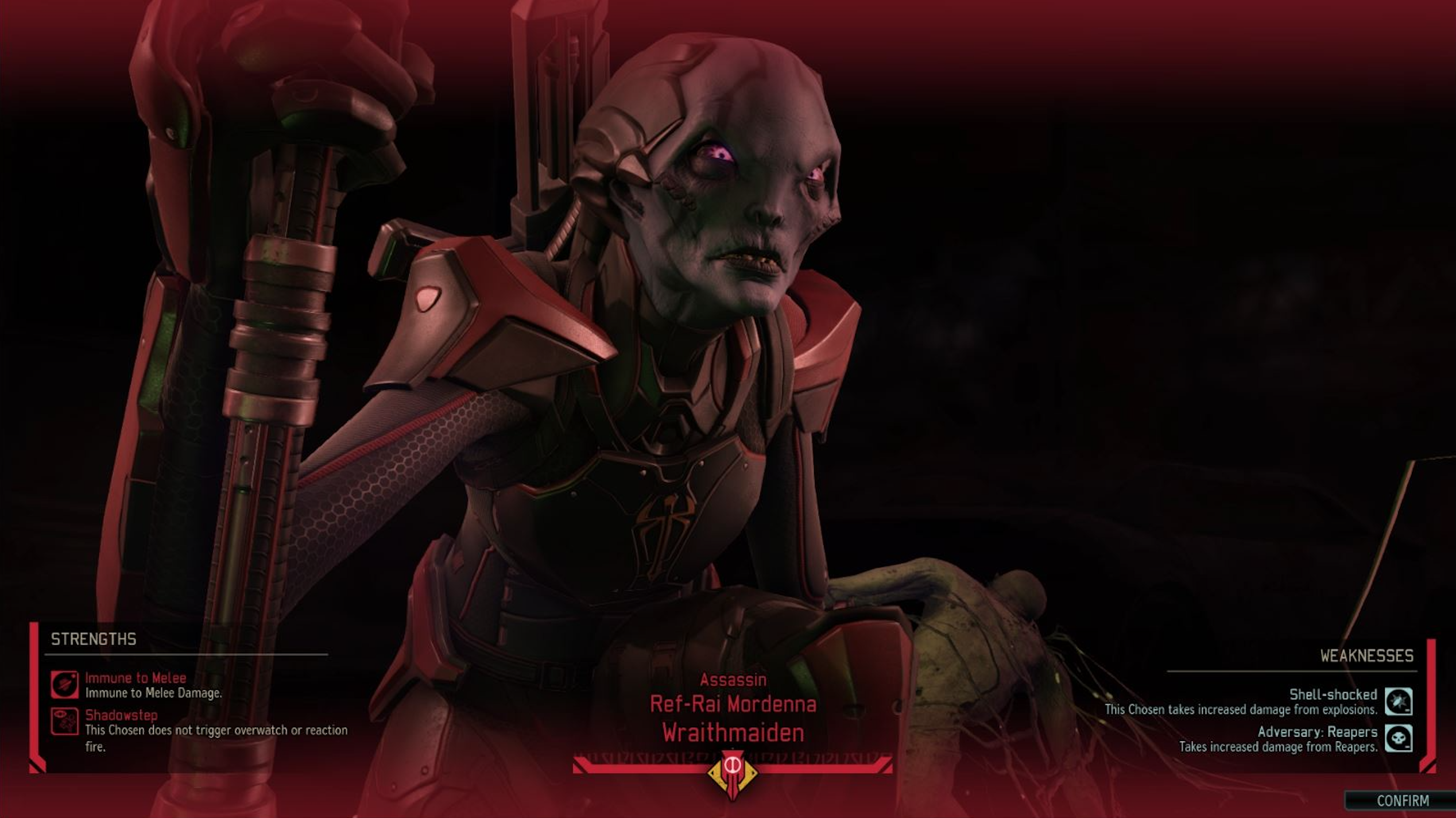 In my playthrough, her strengths were Kinetic Plating (if someone shoots at her and misses, she gains armor) and Shadowstep (she cannot be ambushed). Her weaknesses were Shell-Shocked (she takes additional damage from explosives) and Adversary: Reapers (she takes additional damage from Reapers). This makes it obvious that you should have your Reaper throw an explosive to damage her and destroy her cover so that the rest of your squad can take shots with a lower chance of missing.

Once the Reaper uses her explosive, the Skirmisher can shoot at the exposed Assassin twice for high damage. This one-two punch creates a sense of camaraderie and teamwork between these two characters through their gameplay interactions. Central talks a lot about the value of teamwork, but the player learns it firsthand through the Assassin encounter.

The explicit narrative surrounding this mission is rather rushed. After encountering the Assassin, the Reaper and the Skirmisher immediately become best friends even though they were about to kill each other ten minutes ago. But even without the cheesy cutscenes and dialogue, the structure of the “Lost and Abandoned” mission implicitly teaches the player why it’s necessary for the factions to cooperate.

However, some parts of the level design don’t match this narrative, particularly the second half of the Skirmisher’s section. A large group of Lost appears and you must stand your ground and kill them while waiting for Central to mark a route for extraction. Since you have the Skirmisher, fighting the Lost is very easy, as opposed to fighting the Lost with the Reaper. I don’t understand why the designers put a Lost encounter here when they could have just had another group of Purifiers to highlight the dangers of using the Skirmisher’s grappling hook further.

The Assassin also might come with a different set of strengths and weaknesses, which might not incentivize the one-two punch in the same way that mine did. If she had the Blast Shield strength (immune to explosions), the player would need to find a completely separate way to deal with her, one which might not carry the same sense of teamwork between the Reaper and Skirmisher.

XCOM 2 has always had an interesting relationship between explicit stories and player stories, and finding new ways to combine the two. The base game generally keeps them fairly separated, but War of the Chosen aligns them together through careful level design and pairing certain factions and enemies together. This paves the way for a storyline that unfolds through the player’s personal experience rather than specific scripted missions.