The Wizard of Oz Screening

ACE Lab Presents
The Wizard of Oz (1939)
John Berton will present this historic classic on Thursday evening, 22 January 2105 at 7pm in URBN 239.
One of the first feature films to be photographed in color, The Wizard of Oz has become not only a classic of cinema, but also an icon of American culture. Released in the banner year of 1939,The Wizard of Oz became an American family tradition in the 1960s and 70s when television began screening it as a Special Event every year. The film is notable for its striking production design, its ground breaking Special and Visual Effects and the engaging performances, musical and otherwise from a cast led by the young Judy Garland.
John Berton will introduce the film with a discussion of the place of The Wizard of Oz in film history and American culture and with a review of the special effects techniques used to bring this amazing picture to the screen. 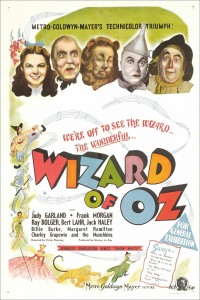