Dreadnoughtus VR is now available for viewing on JauntVR!

The finished project has been accepted by JauntVR’s cinematic VR portal site. Now you can view the whole documentary on any desktop or device supported by JauntVR. Click here to watch. 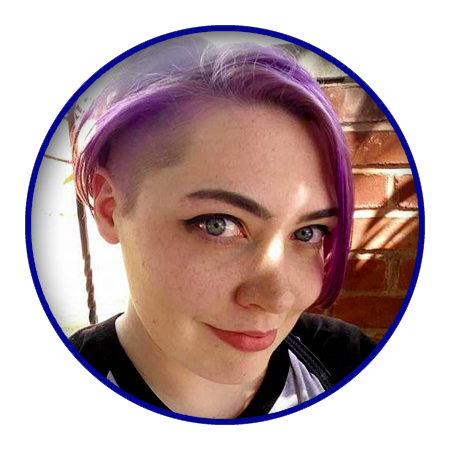 Valentina is a freelance animator and digital media graduate student based in Philadelphia, PA. As a producer of animations, visual effects, video games, and everything in between, she loves working on ambitious digital media projects with passionate, creative people.

Considering herself a 3D generalist with a focus in lighting, rendering, compositing, and production management, she earned her BS in Animation & VFX from Drexel University in 2015 with the completion of an animated adaptation of H. P. Lovecraft’s “At the Mountains of Madness.” capstone project.

She is currently studying how translating the conventions of film language to 360-degree “virtual reality” video affects both scale visualization and viewer engagement in a documentary experience through the creation an immersive paleoart experience about Dreadnoughtus schrani, a gigantic sauropod dinosaur and one of the largest land-animals to ever live.

Immersive Paleoart is the master’s thesis project of graduate student Valentina Feldman. In conjunction with graduate students working in Paleontology at Drexel’s Science College, and the staff at Drexel’s Academy of Natural Sciences, she has been working on an animated reconstruction of the titanosaur Dreadnoughtus schrani, one of the largest creatures to ever walk the earth. This project began as a digital paleoart animation, but has evolved to suit a medium that is rapidly gaining traction in contemporary digital media: Virtual Reality. 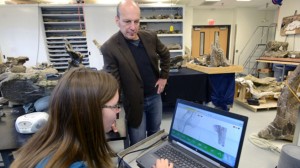 While researching scale within the the context of conventional cinematography — achieved through camera angles, frame composition, careful lens choices and selective editing — it becomes apparent that this language is absent in the emerging medium of spherical cinema. While VR device ownership is on the rise, interactive spherical videos are becoming more accessible than ever. Facebook now allows users to share 360-degree videos, which use a smartphone’s accelerometer to control the POV within a dome-shaped video scene. 360-degree YouTube videos can also be viewed through the lens of Mobile VR devices like Google Cardboard, conveying an unprecedented level of accessible immersion to an audience of social media users. 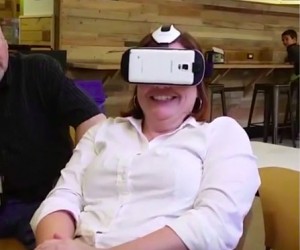 Jennifer Sontchi, Director of Exhibits at Drexel’s Academy of Natural Sciences, experiences her first encounter with a VR dinosaur.

When the viewer controls the camera, the director loses control over scale relationships on a shot-by-shot basis. This not only affects how big something LOOKS, but how big something FEELS — an important distinction in any narrative medium. Preserving accurate scale representation is specifically important for Paleoart, which strives to portray extinct animals with the highest degree of accuracy possible (within the limits of scientific literature). When your subject weighs upward of 60 tons, scale visualization becomes an essential factor in this portrayal. Dreadnoughtus could tip the scales against an entire herd of elephants. Most people have never even seen an elephant in person — how can you picture such an animal in your mind’s eye? Creating an educational Dreadnoughtus film for Virtual Reality could facilitate the public’s understanding of the animal, as evidenced in similar studies that suggest that immersive media technology can influence an individual’s ability to remember information in the physical world. 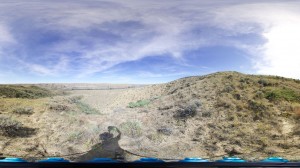 When communicating scale in virtual reality, film language is substituted with the sense of “Presence” induced through spatially immersive environments that blend the boundaries between “real” and “digital.” This evokes the same visceral feeling one gets when looking up at a mounted skeleton in a museum, and can be achieved through careful environment design and narrative cues. This thesis project now takes place over three immersive environments with differently created background plates: Photographic, Videographic, and Computer-Generated. Whether the complexity of the environment has any effect on sauropod scale visualization is yet to be determined. (Storyboards […storycircles?] to come in the near future!) 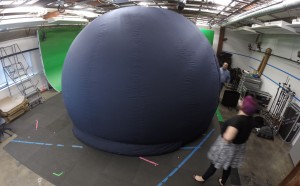 Presence in realtime media implies a “feedback loop” between the player and the experience, which makes the player feel like they affect their surroundings. The limitations of cinematic VR restrict interactivity, but generally allow for higher graphics quality to be rendered. For some purposes(architectural visualization, for example), real-time rendering engines can achieve photorealism that rivals rendered CG. It’s easier to render “things” than “creatures,” though, and the Dreadnoughtus rig will include softbody muscle simulations that are much harder to achieve with a realtime engine. Rendering this project as an immersive video also dramatically extends its reach, allowing it to be shared via Facebook, YouTube, and Mobile VR, and (potentially) educational programs like Google Expeditions.