6pm, Monday, May The Fourth

The original 1977 Star Wars film transformed the movie business, the viewer experience and launched new technologies, businesses, and entire industries that we take for granted today. This, from a film that studios believed was so doomed to fail, that the director had to beg to allow its completion, and the cost of giving up his own salary on the film.

On May The Fourth, it seems only fitting that we revisit this pivotal film, in it’s original, pre-special edition form, and the creation process that brought it to the screen, uncovering it’s direct relations to the tools, economy and career paths we know today.

Join us in screening room URBN 349 at 6pm on May 4 to journey into a film making process from a long time ago and far, far away.

Thanks to all who attended and participated in this event. Here are various links and notes mentioned during our discussion. Have fun! 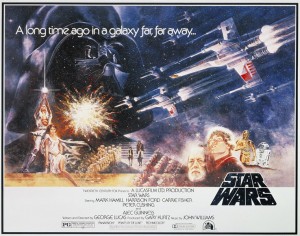