A week ago, I picked up XCOM: Enemy Unknown when it was on sale. I haven’t put it down since. Why is this game so fun despite being built almost completely off of a random number generator? As far as I’m concerned, Invisible Inc proves that you don’t need a percent hit chance to make the XCOM formula work. But this got me thinking: what would actually happen if XCOM removed randomness? What consequences would this change have on the rest of the system?

My new system would work like this. Every time you fire at an enemy, you will always hit them for your weapon’s base damage multiplied by your accuracy, rounded down to the nearest integer. Critical chance would work the same way, and the extra damage is added on top of your standard damage. Enemy hit chance would work the same way against XCOM soldiers. If you have a soldier with an assault rifle (4 damage) and they have a 25% chance to hit, they will have a guaranteed hit for 1 damage. 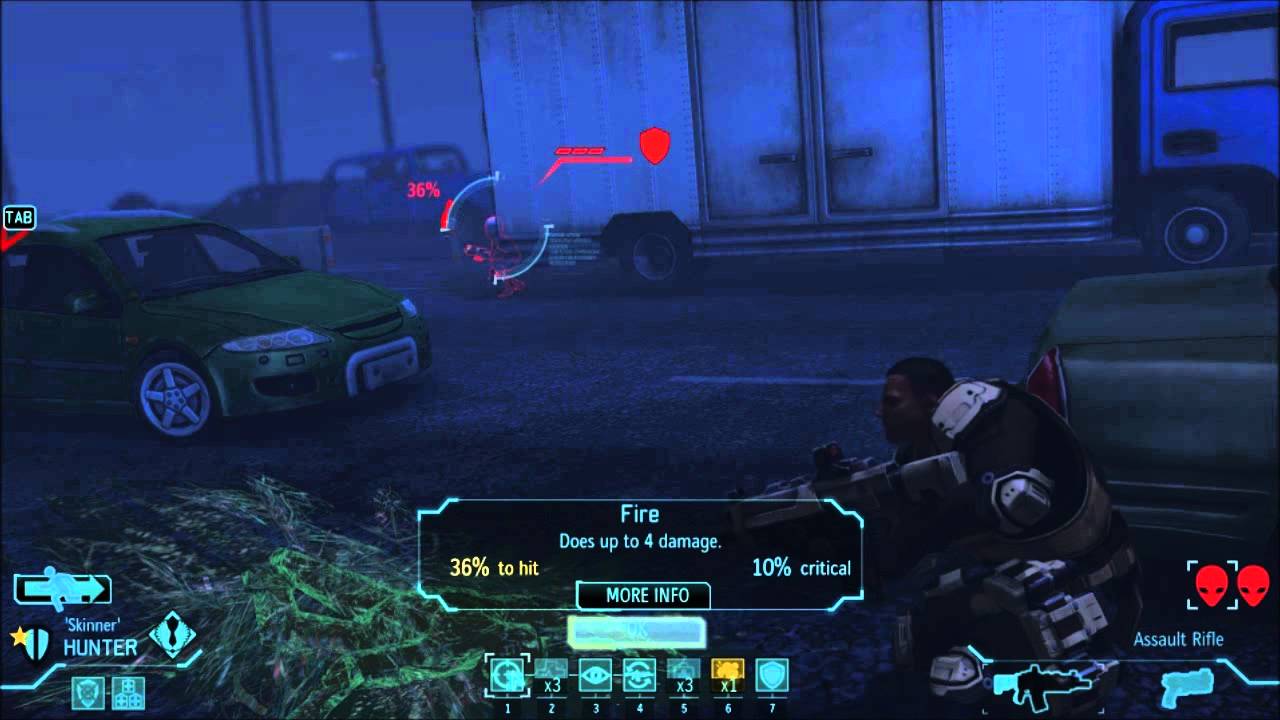 The first point where I could see a major difference is flanks versus firefights. The term “flanking” is self-explanatory, but the term “focused fire” means when you shoot at an enemy through cover hoping to eventually kill them. I’m using that term because it’s usually going to take multiple soldiers to get the kill.

As it is, if an enemy is in full cover and there are no other variables at play, your accuracy against them drops down to around 25%. In this situation, you have two primary options. You can have everyone on your team stay in cover and focus fire, missing a lot and using a lot of ammo but eventually getting it done the safe way. Or, you can send someone to flank the enemy for an almost guaranteed kill, but possibly exposing that soldier in a bad spot. There are other options (explosives, invisibility, alloy SHIVs), but for now let’s boil it down to flanks versus focused fire.

While neither option is 100% guaranteed (even a perfect flank can have a hit percent as low as 80%), flanks are still generally the more reliable option. One soldier with an 80% chance is more reliable than four soldiers with 25% chances. To balance this out, the flanked soldier has a higher risk of being counterattacked. Flanking is the high risk, high reward option, whereas focused fire is the low risk, low reward option.

When you focus fire, you never know how many shots you’ll need to down an alien. Maybe you’ll nail it on your first try. Or maybe you’ll get a lucky hit but it won’t be enough to kill. There’s no way to plan ahead and say “okay, I’m going to take these four soldiers, and if each of them has 25% chance, once they’re all through this alien will be dead.” Probability doesn’t work that way.

What if it could? Instead of each soldier having a 25% chance to deal 4 damage, they would now have a 100% chance to deal 1 damage. This is something you can plan around, and if you want to commit the cost of spending a lot of turns on chip damage, you have that option.

But if focused fire gains reliability, would it not become too strong? Why would you ever risk a flank maneuver when you can get a guaranteed safe kill as long as you wait? In a game with permanent death, slow-but-safe is almost always a better idea than fast-but-risky.

Focused fire needs its unreliability so that other problems can come into the mix. Maybe you have everyone in your squad trying to take someone down when they’re behind cover, but while they’re busy with that you get flanked by another group of aliens. Those are the kinds of situations that make you weigh your decisions. But if that’s the case, why not make focused fire more reliable and deal less damage so it requires more commitment?

Reliability is a ham-handed way to handle a nerf. A large reason for this is that XCOM has very few consequences for camping. You might lose some meld, but that’s more than worth the lives of your soldiers. And even if you have a group of soldiers who spend their turns throwing ammo at an entrenched alien, they can just sprint to catch up with the rest of the team.

All of these mechanics come in place until the only real answer to nerf camping is to give focused fire reduced reliability. There aren’t enough downsides to playing it safe, so they have to make playing it safe very unreliable. Even if it were made more reliable through a change such as mine, that would only mean people would have more incentive to camp. And ultimately, that would make it a more boring game.

XCOM already designed enemy fog-of-war behavior to discourage camping. More often than not, you’re going to be the one running into enemies rather than the other way around. But this, too, feels like an awkward mechanic. Why do sectoids just run back and forth when they have nothing better to do? Mechanically, it makes sense, but thematically, it doesn’t.

Are there ways to give focused fire its reliability while still nerfing it in such a way that it isn’t always the best option? Here would be my idea: shooting makes noise, which can attract nearby aliens to investigate. They won’t investigate if there are only a few shots fired, but the chances become greater the longer the fight goes on. This way, you can use focus fire and have a reliable outcome, but you can also reliably know that you will draw in enemy reinforcements this way.

But this would be a deep mechanical change beyond the scope of a simple mod. And I haven’t even begun to talk about the possible implications of having aliens use this accuracy system against you. At this point, trying to remove RNG from XCOM would be like designing a whole new game. Everything is built around imperfect accuracy. RNG was a huge design trend back in the days of the original XCOM, when DnD-style RPGs were big.

On a more philosphical level, should XCOM have tried harder to remove RNG? Probably not. As frustrating as it is, it’s also what gives rise to XCOM‘s greatest strength: player-created stories. There are the soldiers who land a miracle shot, and the ones who die to circumstances completely out of your control. Even if RNG is not the best idea in terms of mechanics, it ties very well into the thematic message of XCOM.