Kenneth on Games: Li-Ming in “Heroes of the Storm”

Now that Li-Ming has been out for a little over a week and I’ve had plenty of time with her, I can confidently say that she is not only awesome, but a great addition to the roster. She’s mobile but fragile, powerful but unwieldy, and long-ranged but difficult. Heroes of the Storm needed a true skill-based mage like Li-Ming (looking at you, faceroll Kael’thas players). But as much as I love her, she’s still got problems that need fixing. Li-Ming is inevitably going to get nerfed, and I really hope it happens the right way.

An Introduction to Heroes of the Storm 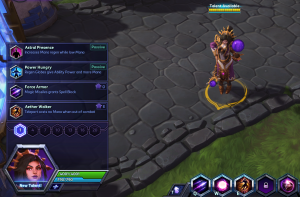 If you’re not familiar with what a MOBA is, it’s basically a game where a bunch of people pick a character and they all fight each other, and they level up and get stronger over the game. In Heroes of the Storm, the characters (called “heroes”) get stronger by picking talents. Every time they reach a certain level, they’re able to select one of several talents available at that tier. Heroes get talents at levels 1, 4, 7, 10, 13, 16, and 20, and each of those levels is a separate tier, so you can’t go back and select talents from previous levels. Different talents will cause the hero to become specialized in different fields, but they always make a big impact on how that hero plays in the game.

This is a great idea because it compartmentalizes each hero and keeps them contained within their own limits. You don’t have external factors like items or summoner spells distorting each hero’s power level. When someone is too strong, the Blizzard designers can just go in and tweak that specific hero’s talents.

That’s what will happen with Li-Ming. She’s way too strong, and Blizzard has a few different ways to tune her. They can decrease her base stats, or they can change something with her abilities. But the biggest changes are going to happen to her talents, and I think the first one that needs to be hit is Tal Rasha’s Elements.

Here’s a link to Li-Ming’s wiki page for references to her talents.

Tal Rasha’s Elements (level 20 talent): Your Abilities benefit from 20% bonus damage as long as they aren’t cast twice in a row.

This is an extremely popular talent for Li-Ming players to take at level 20, but it’s got a few synergy problems. For one, Li-Ming’s abilities have different cooldowns. Magic Missiles has a very short spammable cooldown of 3 seconds, whereas Arcane Orb’s cooldown is 10 seconds. If you use them at the same time, you have to wait for Arcane Orb to come back up before you can cycle through TRE again.

TRE would make more sense on a mage like Kael’thas or Falstad, whose ability cooldowns are a little closer. That way, you actually have a decision between cycling through more abilities versus focusing on one. Li-Ming doesn’t have that decision at all because of how different her ability cooldowns are.

(As as aside: there’s a very interesting decision where Li-Ming is incentivized to use Teleport to reset TRE on one of her other damaging abilities, but doing so would use Teleport and she wouldn’t have access to her only escape. This is a nice component of TRE, but I don’t think it offsets the other problems associated with this talent.)

The optimal TRE build would be: Aether Walker, Triumvirate, Calamity, either Heroic, Illusionist, Fireflies, and Tal Rasha’s Elements. With this setup, you get as much cooldown reduction as you can possibly have, while also giving Teleport a bit of power so it actually benefits from TRE’s +20% damage. Of course, no Li-Ming player needs to be told how ridiculous this build is, and if you’re not a Li-Ming player… just take my word for it, this build is ridiculous.

But let’s put the cooldown problem aside for a moment and look at another aspect of TRE: burst potential. Essentially, it means that the first time Li-Ming enters a fight, she has +20% damage to her first few spells. A max-range TRE Arcane Orb followed up by an accurate set of TRE Magic Missiles is almost enough to delete any squishy from full health.

Li-Ming’s burst is already unhealthily high. The idea was that her burst would be balanced out by the difficulty of executing her abilities perfectly, but that difficulty is reduced dramatically by Ess of Johan (another problematic talent). Adding TRE on top of that makes Li-Ming very frustrating to play against. Knowing that she can’t cycle through TRE after her first round of spells isn’t comforting when you’re already dead. Out of all her level 20 talents, TRE is the weakest at prolonged sieges and teamfights, but the strongest at burst damage.

TRE really starts doing work when Critical Mass activates. Once that happens, the cooldown problem becomes moot, and it becomes a really high moment for Li-Ming when she can cast all of her spells together and constantly cycle through TRE. That’s what TRE is really there for: those awesome moments when you keep blasting through all of your spells, racking up kills left and right and getting stronger every time.

Unfortunately, that also means that TRE is a winmore talent, one that helps you win more when you’re already winning, but doesn’t help you win when you’re losing. If Li-Ming doesn’t get a kill, then Critical Mass doesn’t activate, and her cooldowns don’t come up, and she’s stuck with awkward stretches of time when she can’t cycle through TRE.

In summary, here are the pros and cons of TRE:

+ Really epic moments when you get kills with Critical Mass.

+ Enables risky plays by using Teleport to cycle through TRE.

– Does not help Li-Ming in extended sieges or teamfights where she doesn’t get a kill.

How could TRE be reworked to maintain the pros while minimizing or reversing the cons? Here’s my idea:

Tal Rasha’s Elements (level 20 talent): After being in combat for X seconds, gain a buff that increases your ability power by Y%. Gain this buff immediately when Critical Mass activates. If you haven’t been in combat for the past Z seconds, lose this buff. (I’m thinking X = 5, Y = 20, Z = 5)

This divorces TRE from Li-Ming’s ability cooldowns and instead ties it to a combat timer, so Li-Ming can work towards TRE even while kiting or spamming Magic Missiles. It also trades upfront burst for siege potential by making the power buff delayed rather than immediate. Finally, my version of TRE would help Li-Mings in teamfights without kills by enabling her to get the buff by staying in combat, whereas Li-Mings who do get a kill will get the buff immediately.

The only thing missing is the teleport cycling. If it was me, I would delete Ess of Johan and replace it with a new talent:

Spellslinger (level 4 talent): After using Teleport, gain a buff that increases the damage of your next ability by X%. The buff expires when a spell is cast, or after Y seconds pass. (I’m thinking X = 10, Y = 2)

There. Now TRE is healthier for Li-Ming and her opponents, she no longer has Ess of Johan, and Spellslinger encourages more of a risk/reward playstyle. I could write another essay about how unhealthy Ess of Johan is, but let’s say for now that it makes her a lot easier to play than she was intended to be.

Of course, there’s still a lot more work left to do before Li-Ming is balanced. But I really hope that Blizzard goes through the effort to rework her talents properly, rather than just whacking her with a nerf. She has a really cool identity in the game, and I hope it stays intact.

(By the way, Blizzard: Ess of Johan’s description has a typo in it. It says “When Arcane Orb damages enemies, they are pulled towards it’s center.” There shouldn’t be an apostrophe in the possessive form of “its.” Another reason to delete Ess of Johan, no?)